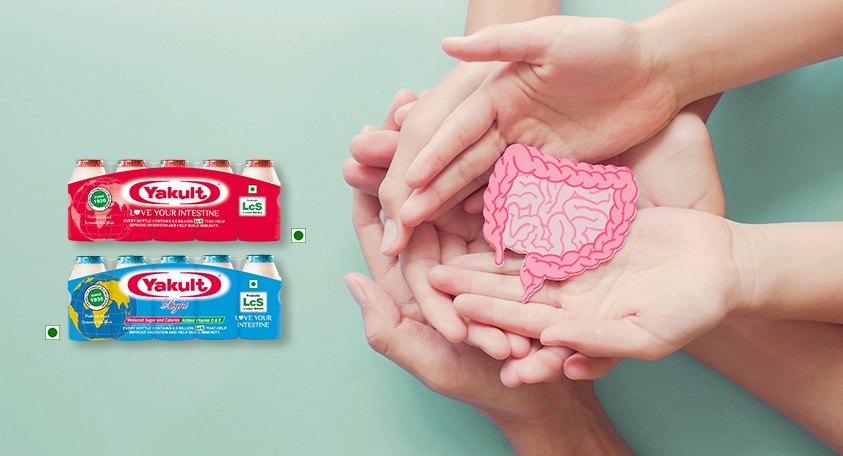 Our digestive system is remarkably efficient. After digestion of food and absorption of nutrients, it gets rid of all the waste material from the body through regular bowel movements. Healthy bowel movements empty the intestine of the undigested food, harmful bacteria and their toxins, so that you are not constipated, bloated or in pain. However, even among the people who are considered to be healthy, many are in a state of chronic stress, lead unhealthy lifestyles, are physically inactive and suffer from intestinal disorders like constipation or diarrhoea.

Constipation affects almost 15% of the world population, and can interfere with one’s daily activities, leaving you feeling lethargic and tired. When one is constipated, water is drawn out of the stool resulting in harder stools, which are difficult to pass. Diarrhoea on the other hand, is frequent passing of loose watery stool, which causes nutrient deficiencies, and loss of water from the body.

Some of the best ways to improve bowel movements is by increasing fibre and fluid intake, including low fat dairy products in the diet, engaging in physical activity, and avoiding alcohol and tobacco.

Probiotics are beneficial bacteria that have long been studied to ease digestive problems and improve bowel movements. By pooling the data from several studies, it was found that probiotics improved stool frequency and stool softness in constipated people.

Researchers at the Yakult Central Institute conducted a study on 40 healthy individuals who had irregular bowel movements. They found that consumption of a fermented milk drink containing the probiotic LcS, increased the number of weekly bowel movements and helped soften stool, making them easier to pass. The difference was more notable in those with a stronger tendency of constipation1.

Probiotics can also help with diarrhoea by suppressing the germs that cause diarrhoea and help the body fight them. A research conducted in 2011 by the National Institute of Cholera and Enteric Diseases (NICED) showed that when a probiotic fermented milk drink containing LcS was consumed by children in the age group of 1- 5 years, for 12 weeks, the incidence of diarrhoea reduced significantly by 14% 2. In another study conducted by Allen and his colleagues, it was shown that when probiotics are used in combination with rehydration therapy in those suffering from diarrhoea, they can reduce the duration and frequency of infectious diarrhoea in as little as 2 days3.

Very often antibiotics can also cause diarrhoea because these strong drugs can kill both the bad and the good bacteria. Probiotics can reduce the risk of this type of diarrhoea in both adults and children4.

A recent study at Mc Master University showed a link between a probiotic and mood improvement in adults suffering from Irritable Bowel Syndrome. The patients were lesser depressed when they consumed a probiotic. IBS affects the large intestine and patients suffer from abdominal pain and altered bowel habits like constipation and diarrhoea5.

The time taken for a probiotic to act will depend on several factors like the probiotic strain, product quality, dose and the health condition. Researchers are still trying to understand the various benefits of probiotics and it appears that they keep the digestive system in balance, improve digestion of lactose, improve digestive disorders like bloating, pain, constipation, diarrhoea and produce certain vitamins.

Because many microbes used as probiotics already exist in our body and there are decades of safe use as a functional food in the world, probiotic foods are considered safe. They have no side-effects and can be easily incorporated as a part of the daily diet to ensure regular bowel movements and a healthy intestine.