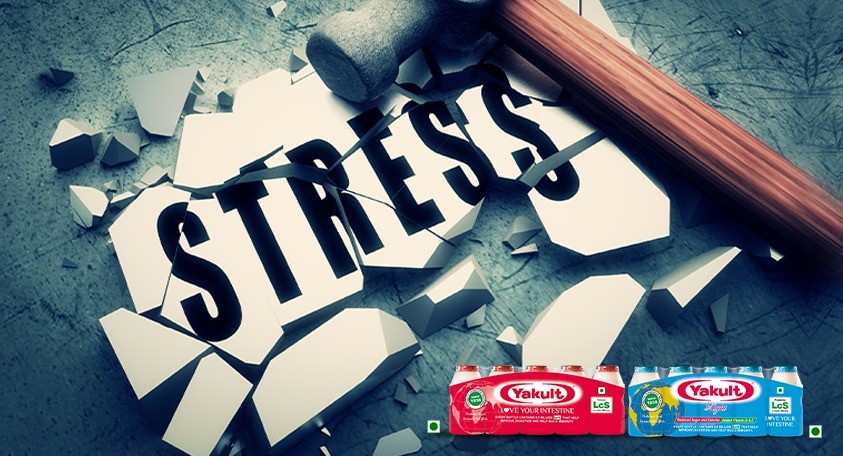 The intestine lives in harmony with its 1.5 kg bacteria known as the intestinal microbiota. These bacteria play an important role in every aspect of health. More recently, scientists have discovered that this group of bacteria are closely linked to the brain. There is a two – way communication between the brain and the bacteria and vice versa.

We all know that prolonged stress disturbs our sleep pattern, causes weight gain and results in an imbalance in the hormones of the body. Increased stress can also negatively influence the health of the intestine, one of the most important organs of the human body.

When there is stress at one end, there is bound to be stress at the other end as well. Under stressful situations, the brain alters the performance of the digestive system.

Just imagine a situation where you are getting late for work or for a meeting. The brain immediately sends signals to the hypothalamus (a tiny control centre in your brain) to release the stress hormones – cortisol and adrenaline. When this stress continues day after day, it can put your health at risk.

Your body then,pays less attention to digesting food and uses all its energy to dealwith the stress. As a result, digestion becomes slow which leads to a weak immunity. A weak immunity results in undigested food and toxins remaining in the intestine for much longer periods of time. This interrupts normal digestion and the detoxification process which is very important to remove the toxins from the body.

Most people suffer from stress on a regular basis, and often have a problem with their digestive function. This is particularly seen among students who are undertaking an examination, or white – collar workers dealing with job stress. They might experience poor digestive healthon a daily basis including a loss of appetite, or the need to frequently visit the toilet. In more severe cases, stress or anxiety can cause conditions like Irritable Bowel Syndrome (IBS) with alternating symptoms of constipation or diarrhoea.

A study conducted in Japan showed that regular consumption of LcS fermented milk drink, could relieve stress by modulating the gut brain connection. The study was conducted on a group of healthy medical students who were under academic stress because they were undertaking a National Medical Examination. They were divided into two groups where one group was given the LcS fermented milk drink 8 weeks before the National examination. The other group received a non -fermented placebo drink.

The study showed that the LcS fermented milk drink could reduce the secretion of the stress hormone (cortisol) and also the risk of infections which are common during conditions of extreme stress.